“I wanted to be a pilot like so many other people,” said Grand Junction resident Erling Brabaek. “But I couldn’t—at least, not in Denmark.”

Danish-born Brabaek joined the Royal Danish Air Force in 1985 as a contract soldier while the Berlin Wall stood. When “Top Gun” was released, he tried to become a fighter pilot but was unsuccessful because he wore glasses. Instead, he joined the missile air defense program as a technician. 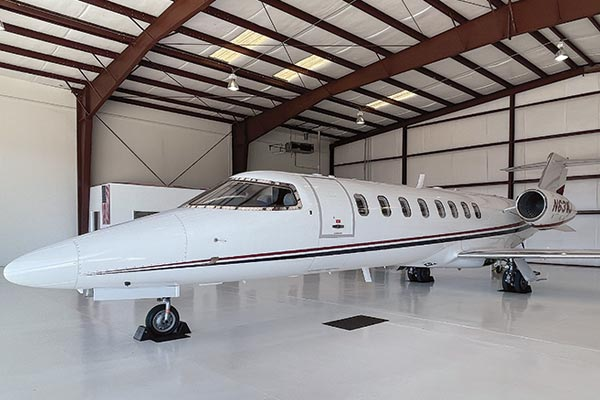 “Ironically, I maintained the missile defense system in Denmark to shoot down airplanes,” said Brabaek, 56.

His interest in flying became little more than an afterthought until the air force sent him to America for technician training in El Paso, Texas. There he found a nearby flight school and managed to fly in the wee hours of the morning before training.

“I would get up really early in the morning, do a flight lesson, then go to school and then back to flying,” he said. “I was severely hooked!”

When he returned home to Denmark, Brabaek knew he wanted to be a professional pilot. He earned enough hours and procured his private pilot license, but he still couldn’t fly in Denmark because it was so expensive.

“Most people who fly come from nobility,” said Brabaek. “It can be four times more expensive as it is in the U.S.”

As he contemplated his next steps, the Berlin Wall came down. With the European threat greatly reduced, the air force no longer needed their surplus of soldiers.

“The military solution was to offer a sort-of early retirement for a lot of people,” said Brabaek.

The government offered him incentives including severance pay, and sponsored him to study in America to become a pilot. From there, he left the air force, sold his belongings and made his way to Pegasus Flight Center in Dallas. The moment he stepped into Dallas-Ft. Worth Airport, he knew this wild adventure could steal his very heart—and it did.

“We’ve all heard this saying as foreigners—that America is the country of make-believe,” said Brabaek. “Moving to America and studying under a J-1 Visa, to me, it truly was that.” From ostrich chicks to former presidents

Brabaek began flying after attaining his commercial pilot license in 1990. He went from flying freight to corporate jets within a few years. But it wasn’t until he met his wife Martha in 1991 that he knew he would never leave the U.S. again.

“I went to work for a freight charter company and I was gone all the time,” he said. “I flew mostly at night and sleep deprivation was an issue.”

Pressures were often overwhelming. Many times, he thought the plane would be hijacked for its cargo.

“We flew gold and silver in and out of Mexico,” he said. “It’s kind of scary when you’re by yourself in an airplane and you have 400 pounds of gold with you.”

Other times he would land on short, undesignated runways that could send him straight off a mountain.

Brabaek recounted a time when his contract had him flying ostrich chicks out of Mexico into the U.S.

“It gets dark and you think the chicks are going to die,” he said. “There’s no light at the airport you’re landing at so the ranchers go out and light up the runway with their headlights on their cars. It was right out of the movies!”

Brabaek became a corporate jet pilot in 1994. A small company out of El Paso had bought its first Learjet and was looking for a pilot to fly for them.

“I was offered the job and ended up working there for 20 years,” said Brabaek.

During that time, he met many interesting people. In the late ’90s, his company was approached by the Secret Service about flying former president George H. W. Bush from Houston to El Paso and back to Houston. That day was forever fixed into Brabaek’s memory.

“It was just a wonderful opportunity to meet someone of that caliber,” he said. “He was just a down-to-earth, wonderful person.”

On the return trip back to Houston, they nearly didn’t make the landing due to fog, but Brabaek was able to touch the plane down and deliver the former president safely.

Another memory that stands out was the day Brabaek flew home from New York City, just one day before the 9/11 attacks.

“I remember seeing the Twin Towers and taking photos,” said Brabaek. “About half of my family was visiting from Denmark. We were all shocked. I remember my fellow pilots weeping.”

Brabaek has enormous pride for his new homeland. Although he’s lived in the U.S. legally for more than three decades, he applied for citizenship last year and his interview is just weeks away.

“There’s a question I may be asked about whether or not I would be willing to pick up arms to defend the U.S. if necessary,” he said. “You bet I would!” The Learjet cabin has 9 seats in total.

The real land of make-believe

In 2014, Brabaek received the call of his dreams when he was offered a job as a corporate pilot for Grand Junction car dealership Western Slope Auto. Brabaek had flown into Grand Junction for aircraft maintenance many years before and found the city to be a lovely little escape from the southwest. Currently, he resides there with his wife and two daughters.

“We just fell in love with the Grand Valley,”
he said.

In addition to flying, Brabaek also loves teaching. A few years ago, he stepped in as an instructor for Western Colorado Community College’s aviation program. He’s also a commissioner on the Grand Junction Regional Airport Authority Board.

Brabaek hopes to have many years of flying ahead of him and has no plans to retire.

“Flying is a hoot!” said Brabaek. “But maintaining a plane is expensive. I don’t know that I could afford my own plane, but I think I’ll be satisfied with all the flying I’m doing now.”

Although flying is an expensive hobby, Brabaek said it’s well worth the cost.

“It’s never too late to become a pilot,” he said.

A private pilot license requires at least 40 hours of flight time. Brabaek said students of any age should plan for at least $140 to $200 per flight hour, plus the cost of instructor fees and classes.

“There’s nothing more fun than hopping in an airplane, flying around and see the Uncompahgre or the Colorado National Monument from the top!” he said.

The sky's the limit

Willow Run, Michigan, near Detroit, was home to the factory that Henry Ford set up to build airplanes. The B-24 Bomber was built there and i... Read More »